Do any of you clever folk have an idea how to set up this scene?

In the image is the standin puppet for Sabela — a very early WIP who I use for test walk cycles, and lighting, etc while the other puppet is getting ready for the scene.Â  Wow, that sounds silly — basically Sabela’s right thumb broke off, and I am replacing it.

The graphics are also temporary; I am still playing around with fonts!

Anyway, I need to figure out a way to a) cut this cabbage leaf as though Sabela is cutting it with scissors, and b) have the cut-off pieces fall into the soup pot.Â  So my dilemma is — do I pre-cut the leaves and then stick the pieces together with something easy to take apart, so that it appears she is cutting them?Â  Touching up the seams in post?Â  Or do I use an X-acto or something to cut while she is cutting with her “scissors?”Â  (The leaf is very tiny, by the way — about 1″ x 2”, and made of paper coated with acrylic, so not that easy to cut.)

Also — the pieces that fall.Â  The only solution I can think of is to put a thread there, vertically, coming out of the pot, to link to the leaf… but it would limit her movements so much, as the work area is so tiny, and there’s not a lot of room to maneuver there as it is.

I haven’t updated this blog in a while… Â it’s shameful! Â Even more shameful is that I’ve fallen behind on the film. Â Today is a happy day though, so I had to announce it — that I’m well on my way to overcoming my fear of the Walk Cycle.

I can’t believe I have been so hung up on this one shot. Â This is probably the only shot in the film that has a walk cycle. Â Not only does it have a walk cycle, but it also has many things animating on the stage behind this walk cycle. Â So if there is a mistake in the walk, then there is a lot of animation lost.

This shot has been lit for a few weeks. Â I’ve had to prep some other things — which is a whole other post that I will get to once the shot’s done — but since the lighting has been finished I’ve also taken a vacation, done some paid gigs, done some work on the house, socialized, and generally done whatever I can to stay away from this dreaded walk cycle shot.

But now the fear is pretty much gone! Â I’ve done it! Â It’s far from perfect — the stand-in puppet does some moonwalking and stumbling but there’s something about it that is kinda not too bad. Â I plan on practicing this a few more times before bringing the real Sabela into the set and animating it for real. Â Gulp.

Sadly my magnetic-feet idea did not work for the walking. Â At the end of the walk I tried to balance her in a couple of poses with just the magnets, and that turned out OK… Â but it was very tricky to get her to walk, with her feet being so tiny and all. Â I will have to animate this scene twice — one pass for just the background elements (there will be elements of the set rolling onstage behind her), and one pass with the set elements, Sabela, and her rigging. Â I’ll then have to paint out the rigging in After Effects. 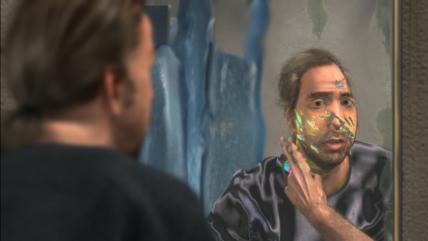 I went to a talk on Friday featuring Chris Landreth, the writer / director of the 2005 Academy Award-winning animated short film Ryan.Â  I’ve mentioned this film here before, and how much I love it.Â  Chris had some interesting things to say about character animation, which, to me, summed up all the reasons why Ryan was so brilliant.Â  (He also showed us his new short, The Spine, which you can see glimpses of along with some behind-the-scenes footage here.)

Chris talked about his preferred visual style, which he calls “psycho-realism.”Â Â  This is where a character’s inner psychological state is represented by their outward reality.Â  If you’ve seen Ryan then you will immediately understand what he’s talking about here.Â  If a character is feeling broken and disheveled, he will look broken and disheveled.Â  Parts of his skull will be missing, and his hair will actively tangle, all by itself.Â  If a character is psychologically dependent on alcohol, the bottle will reach out to him with little arms. There was a bit of a eureka moment for me when Chris brought up images of Francis Bacon paintings in his presentation.Â  I am a huge fan of Francis Bacon as well, and can’t believe I’d never made the connection before. Bacon also imposes his psychological state onto his subjects.Â  He could have certainly painted “realistically,” but his inner reality spoke far louder to him.

The reason Chris’ psycho-realism works so effectively is that there still IS such a strong sense of realism there.Â  The animation is so natural, so precise, so detailed (especially in The Spine) that the effects are completely believable, as opposed to being cartoony.Â  There is a fine line here.Â  Once you distort the human body, exaggerating features, or playing around with anatomy (taking out someone’s spine, for example), there is the risk of losing this “Francis Bacon” effect.Â  The reason why Bacon’s paintings, and Chris’ characters, are so effective in communicating their inner states is that there is still a solid hold on something we all know about humans.Â  The characters are realistic enough, in their appearance and/or movements that we can still relate to them.Â  (For a terrific explanation of this phenomenon see Scott McCloud’s Understanding Comics.)

However, he also was careful not to get too realistic with the character design.Â  If you take out someone’s spine or the chunk of someone’s head, and that character is designed in a photo-real style, you run the risk of shocking the audience too much, or making the film impossible to watch.Â  (Anyone who’s in Toronto who has been to the AGO recently has probably been shocked by the Evan Penny sculpture.Â  Yikes.)Â  This, Chris explained, is commonly known as the uncanny valley phenomenon.

Now, I am not a “trained” animator, so many of the issues he raised were new to me.Â  I approach animation as a practice in observation of outer and inner worlds: the study of movements, and the study of mind.Â  This requires both meticulous planning and hypersensitive improvising:Â  the animator needs to take in some detailed observations on the real world, how things move, how people move, but she also needs to breathe some spontenaiety and aliveness into the character, which takes a particular clarity of mind to achieve.Â  Chris said the animators on his team never work from dope sheets — ever — but as a stop motion animator you don’t get endless amounts of keyframe tweaking, so I feel there needs to be some sort of dope sheet planning.Â  There are not unlimited chances to refine the movements.Â  So to me there’s an art — a definite challenge — to this quality of being both “in the moment” and to being tediously obsessed with well-researched details.

Chris described three common pitfalls for character animators.Â  The first was pose-to-pose acting.Â  As a practice, he sets up visual clues for his team in attempt to rid them of the pose-to-pose method of animating, favouring more of a method acting style.Â  Early animation, pre-Disney, used to do this:Â  the character goes into one distinct pose, then another, then another.Â  He showed us a juxtaposition of two clips that he typically shows his animation team:Â  one from a 70s production of The Merchant of Venice, starring Laurence Olivier; the other a 2004 version of the same scene, with Al Pacino.Â  Laurence’s acting seems a little cheesy in comparison — sorry, I don’t know how else to describe it — very blocky and staccato and exaggerated.Â  The contrast is so extreme — Al flows effortlessly through his movements as he speaks and somehow this just translates as being more modern, more naturalistic.Â  It doesn’t seem like he’s acting, though his movements are just as expressive as Laurence’s.Â  There’s a casual quality to it that makes it more believable as a non-staged event.Â  So, while pose-to-pose animation may have its place, Chris prefers the smooth natural flow of a method acting approach.

To achieve this sense of flow, the animators filmed themselves acting out the characters movements, over and over again.Â  And studied them.Â  In mind-boggling detail.Â  (Check out some behind-the-scenes footage of The Spine to see some of what went on here… very interesting!)

The second thing the animators had to watch out for was what he called “twitching meat.”Â  This is perhaps something more applicable to CG animators, since stop motion is plenty twitchy enough — but generally he was talking about the easing in and out of moves, and motion curves on a graph, that should never be perfectly smooth — we all move with synapses firing off left and right, and so our moves are not mechanical or direct.Â  Sometimes we hesitate, waver, and twitch.

And finally the third detail for the animators to think about was saccade, or tiny eye movements.Â  When in conversation with someone, our eyes are always flitting about, never just focusing on one spot, but examining a whole scene, or a whole face.Â  Our eyes, too, reflect an unease, in the mental disturbances which ebb and flow.Â  Our minds are rarely perfectly still.Â  The more nervous and unfocused a person’s mental state, the more their eyes flit about.

The Spine will apparently premiere at the Toronto World Wide Short Film Festival, and will be travelling around to various international festivals this summer.Â  Be sure to check it out — I don’t have any comments on it, because I only saw it once, and on a tiny screen; all I can say is that it is complex.Â  And that it’s difficult to watch, as Chris freely admits.